This page may contain affiliate links. We earn commissions when you purchase through these links. Learn more
Home / Celebrity Workouts 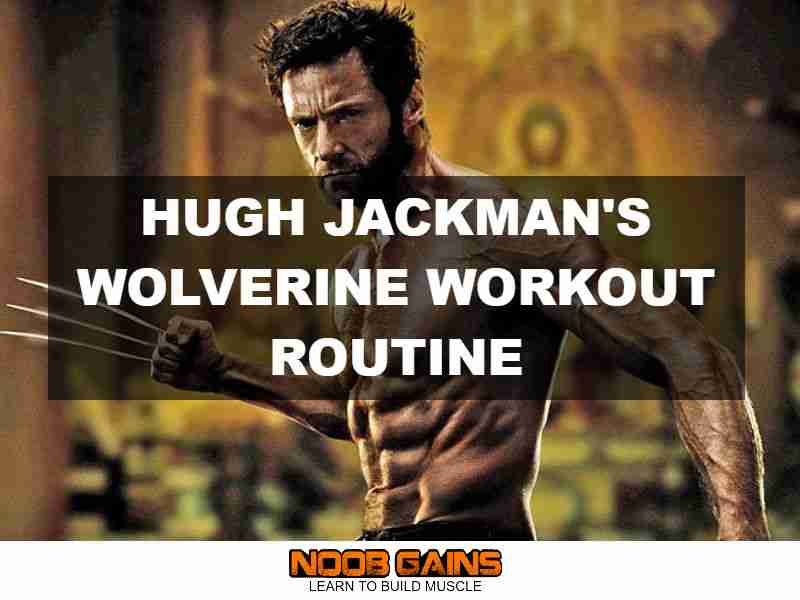 It took Hugh Jackman years to perfect the look of Wolverine. He was definitely in good shape when he started playing the role in the Marvel X-Men franchise, but he has gotten seriously ripped for the most recent films. So how did the Aussie actor do it?

Make sure you read this blog post to the very end because you’re about to discover:

Turning Hugh Jackman into the Wolverine

In the 13 years since he 1st played #Wolverine in #XMen, Hugh Jackman has changed his body to fit the role… a lot. pic.twitter.com/l9kQ0DvYx3

Jackman says that Wolverine didn’t have the look he wanted in the first three X-men movies. But, in the most recent ones like Days of Future Past and Apocalypse, he finally got the look he had envisioned – animalistic and savage, with his veins popping out.

I wanted audiences to say, ‘OK, this guy could quite easily rip someone’s head off.’ That was always the goal,

To get the body he wanted for the role, the 50-year-old actor took a painstakingly measured approach to his diet and workout routine to get maximum results. Every rep, set, or piece of chicken had a purpose. And, when Jackman finally became the Wolverine he had dreamed about, it was a triumph in sports science.

He had about six months to reach his goals, so Jackman spent hours in the gym tackling an intense wolverine workout, kept his eating clean, and increased his protein and calorie intake to professional athlete levels.

Jackman did all of this with the help of London-based trainer David Kingsbury, who based Jackman’s regular workout sessions around progressive overloading.

Diet Plan of the Wolverine

Hugh says that his diet took precedent when becoming Wolverine because that is what would ultimately determine how he looked. He broke his results down to being 70% from diet and 30% from his training.

He was on a very strict carb cycling, calorie cycling, and intermittent fasting regiment that included about 4,000 to 4,500 calories a day. However, he did have lean days where he would drop down to about 3,500 calories.

He ate six meals each day, all consisting of protein, and, his intermittent fasting was on a 16/8 schedule. This meant that Jackman would fast for 16 hours and then have an 8-hour eating window. He would always start his eating window immediately after his morning workout session.

To determine his calorie consumption for the day, Jackman looked at the day’s training. On heavy weight days, he had a high carb day. By contrast, on light days and rest days, he went low carb or had a green, leafy veggie day.

Jackman’s carb cycling approach was designed to increase his fat burning and muscle gains, give his body adequate energy, and to stimulate an insulin response to get nutrients to his muscles.

The Wolverine Workout: how to get ripped the Hugh Jackman way; simpler than you'd think! https://t.co/Dm1xDnpPgg pic.twitter.com/xsb2OBD4sN

Just as intense as his diet, Jackman’s wolverine workout routine lasted about three hours each day, including 45 minutes of low-intensity cardio and weight training first thing in the morning. In the afternoons, he had a high-intensity cardio session.

I’m not a huge fan of working out more than an hour each day (you shouldn’t be either). That’s why there’s a more efficient way to build muscle with a superhero workout plan like this instead.

During his morning weight training, he would start with one of four core exercises:

On those core four, he went for strength during the first three weeks by doing heavy weight and low reps. Each week, he would increase the weight (progressive overload), but stick to around 3 to 6 reps.

By week four, he would drop the weight and increase the reps. This is considered a deload week and it’s commonly used in different forms of workout periodization like in Hugh Jackman’s case.

For example, this is what his weight percentages looks like from week to week:

In case you didn’t know, 1RM means one rep max and all of Jackman’s weight percentages were calculated against this value. Of course, you’ll need to use a calculator or have a general idea of your own one rep max to follow this kind of periodization.

Be aware that these workouts are really overkill for developing a body like Hugh. In fact, this warrior shredding program we found does a great job of leaning you WAY down while only spending an hour each time you’re in the gym.

Everything changed week to week with Jackman’s workouts, but here’s the breakdown of his very first week which includes 5 distinct workouts.

Let’s be honest, to get ripped like Wolverine, you basically have to become a crazy person. If you want to take on the same approach as this wolverine workout, that means a constant cycle of calorie and carb intake, plus custom workouts based on your diet.

If looking like Wolverine is your goal, you have to remember three important things:

Like Jackman already mentioned earlier, his incredible physique was due to a 70% focus on eating a good diet. Additionally, you can eat the cleanest diet on earth, but if you’re not hitting your daily energy requirements (ie., calories) then you’re not going to reach your goals. You’re either going to lose your hard-earned muscle, or gain unwanted body fat.

For this reason, make sure you dial in your daily calorie targets and do your best to stick with it every single day.

There’s no skipping leg day and you can’t just train your arms. If you want to have a well-rounded and shredded boy like the Wolverine, then you have to have well-rounded wolverine workout schedule too.

This means including plenty of compound lifts like squats, deadlifts, bench press, overhead press, and weighted pull-ups. Focusing on these exercises will ensure that you build muscle in all the major muscle groups so you don’t create any visual muscle imbalances.

Hugh said it perfectly when he admitted that his physique isn’t about looking for shortcuts – it’s about making training and nutrition a top priority.

Above all, know why you’re doing it. If you train too hard and too often, you’ll burn out. You need to get to the point where you want to train, where you’re rested enough to really smash it in the gym – which is hard when you’re actually in the filming process. You have to work smartly.

No matter if you are an actor playing a superhero, or a regular guy working a regular job, it’s tough to hit the gym for hours every day and stay insanely focused on your calories and macros.

And here’s something else you’ll notice…

There’s actually a very repeatable system to making a dramatic superhero transformation (and it’s simpler than you think).

If you’d like to learn more, I reveal everything about this awesome course in my Kinobody Greek God Program Review.