Home / Workouts
This page may contain affiliate links. We earn commissions when you purchase through these links. Learn more 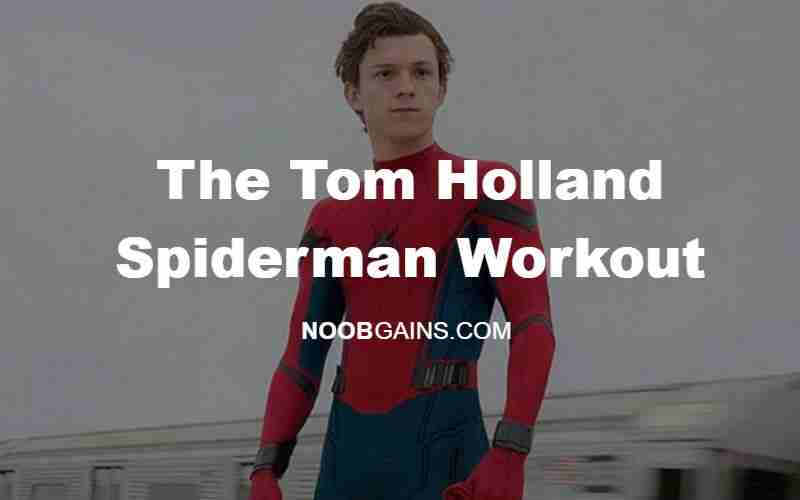 Tom Holland might not look like your typical superhero actor when you first see him but when they picked him to play Spider Man, it seemed like a perfect match.

They must have seen his potential for getting absolutely ripped, which is exactly what he did with a special Spiderman workout to get ready for the role.

For Tom Holland, the road to getting built wasn’t easy. It took a lot of hard work and a strict exercise and diet plan for him to get Spider Man ready, but he did it.

If you’re wondering what Holland did to get in shape for his role, read on to find out.

Tom Holland Taking the Role as the Webbed Crusader

If you’re familiar with Holland’s career from the very beginning to him becoming Spider Man, it’s a pretty amazing story.

He started out in theater and appeared in a lot of musicals during his early career. I guess all the dancing gave him the ability to make those Spider Man moves…but when you think of going from musicals to superhero movies…it’s a trip.

When he first got cast as Spiderman, Holland said his ‘life was flipped upside down’.

He was first cast as Spider Man in Captain America: Civil War (2016). He was mainstage in 2017 when Spider Man: Homecoming was released and then wowed audiences again in 2018 when he appeared in Avengers: Infinity War.

He’s also scheduled to appear in Spider Man: Far From Home and in the next Avengers film which is scheduled for release in 2019.

When training to get the lean look like Tom Holland, it’s important to maintain a caloric deficit.

Holland is young, has a fast metabolism, and moves around more than most people. Therefore, he was able to keep his calorie intake a bit higher than some and it probably seemed more like a targeted mass gaining plan, but overall he needed to burn more calories than he consumed.

In any case, here’s a pretty good outline of what Tom Holland ate during his training.

He avoided junk food and drank plenty of water. He also ate a diet with a good balance of proteins, carbohydrates and fats.

It’s unreported whether or not Holland took supplements to improve his results, but I wouldn’t be surprised if he took something like pre-workout, kratom, or caffeine to increase his workout performance.

Now Tom’s Spiderman workout plan isn’t something I would necessarily recommend to a casual noob, but I can’t complain that it wasn’t effective for him… because it was.

When it came to a workout plan, Holland’s consisted of a five step routine. Here’s how it went down.

Warming up is an important first step in any workout because it helps to avoid injury and improve your range of motion during your session.

Everyone warms up differently, but 2-3 minutes on a bike or rowing matching is a good way to start.

EMS stands for electrical muscle stimulation and its been a part of athlete training sessions since the 1950’s.

During EMS, your muscles are attached to devices that “shock your muscles into working.” This is said to increase the intensity of a strength training routine by mimicking the function of your brain causing your muscles to contract.

Now I have no idea if this actually helped his results, but he did it often. I really wouldn’t recommend this to anyone.

Holland did 20 minutes of EMS during this stage of his workout.

Yep, smashing a tire with a sledgehammer is a great way to burn fat and build muscle. Holland did four sets of these for 2.5 minutes each.

There are 4 exercise in this circuit and Holland went through all 4 ten times each to make for one round. He then continued for a total of four rounds.

Holland did a warm down after his work out to prevent cramping. This was a 2-3 minute light cycle or walk.

How to Make Your Own Spiderman Transformation

There are things that Tom did in his typical workout like burpees, sledghammer swings, and some cardio that contributed to his lean body.

However, there are other things that were probably a waste of time and effort like the EMS machine and putting on an altitude mask.

Regardless, if someone approached me and asked “how can I get a body like Tom Holland” here are the main things I would recommend…

Eat in a Caloric Deficit

When you put yourself in a minor caloric deficit, your body will burn more calories than it receives leading to fat loss and a visual six pack. Be sure to eat high protein, moderate fats, and fill the rest with carbs.

Using low reps and high weights can be a great way to build muscle and strength. Try to stay within the 4-6 range to prime your body to build both strength and size.

Chin-ups and deadlifts are great at adding a lot of muscle to your frame quickly and chin-ups specifically are going to add more muscle to your arms and upper back leading to a wider upper body look overall.

Taking the Spiderman Workout to the Next Level

Now you know the details of the Tom Holland Spiderman workout, but you need a lot more than just a routine to push your physique to the next level.

All of these concepts are covered in much greater detail inside of  the Kinobody Greek God Bulking Routine for building muscle. That’s my top recommended complete diet and training program for creating a very impressive “superhero-like” physique for average guys.

Holland might look like a young scrawny kid, but he definitely knows how to fill out a Spiderman suit. The right diet and exercise can help you get these results as well.