This page may contain affiliate links. We earn commissions when you purchase through these links. Learn more
Home / Workouts 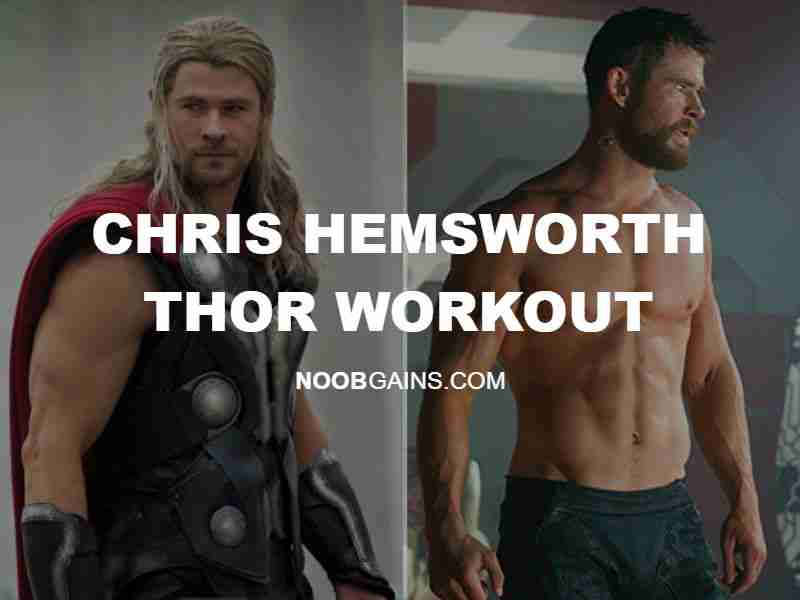 When you look at a guy like Chris Hemsworth, you gotta wonder how the heck he got so freakin’ jacked. I mean… his acting role as the God of Thunder was a pretty tall order so he had to undergo some very intense training to actually make the transformation.

But if you search up old pictures of the actor, you’ll find that Chris didn’t always have the buff physique that earned him the role. It took a lot of hard work for him to get to where he is now.

Read on to find out more about how Chris got so ripped.

Many of us became familiar with Chris Hemsworth when he first appeared as Thor. This was a breakthrough role, and many might not realize that Chris wasn’t always quite so big.

When asked about his transformation, the actor said it took tons of hard work.

He cites 5 days in the gym and eating plenty of protein as part of his diet and workout routine.

The actor says his body does not “do that naturally.” Others who worked on the set with him testified that it took a lot of muscle and a special Thor workout routine to actually fill out that superhero suit.

Before we start going into exactly how Chris got so buff, it’s important to realize that everyone should take their own body statistics into account before proceeding with any muscle building diet and exercise routine.

For example, even though Chris Evans and Zac Efron needed to make stark transformations for their own acting roles, they went about it quite differently.

Your height, weight and genetic build will all affect how you should adapt your workout and the results you can expect to see.

Chris Hemsworth is 6’3 ¼. His Thor weight is 201 and measurements are approximately:

Yep, his arms are only 16” which might surprise you, but 16” arms are pretty darn thick and who knows… Chris may have done a lot of pump work before certain shirtless scenes in order to create a short-term illusion of extra size.

So let’s take a look at what’s exactly in the Thor workout routine.

Chris used a 5-day body part split routine that looks like this:

He then took 2 rest days and hit it again the next week.

In addition to the usual reps and set, here are some rules Hemsworth followed:

Of course, no workout routine is going to be effective unless you eat a diet that targets muscle growth and fat reduction.

When working on his Thor-like physique, Hemsworth including an ample amount of protein with a balance of carbohydrates and healthy fats in his diet.

Calorie consumption was higher on training days to support energy loss and recuperation. On rest days, not as many calories are needed.

This eating method is called calorie cycling and it’s used to maximize muscle growth while minimize fat gain on days you don’t need the surplus of calories.

Based on someone with a similar physique to Chris’s, who wants to maintain a weight of around 180-200 lbs, here’s what we’re looking at in terms of daily consumption.

For Chris, breakfast included foods like eggs and oatmeal.

Fruits and vegetables were added as sides and snacks.

How to Get Jacked Like the God of Thunder

You might think that no matter how hard you try, you’ll never get jacked like the God of Thunder.

Now I’m not going to outright say it, but sometimes actors in Hollywood are not eating just bananas and chicken breasts to make the radical transformations they show on the big screen.

However, if you want to make your own superhero transformation, it’s still possible.

Progressive overload is based on the theory that you’ll only start improving your physique if you force your body to adapt to a tension above and beyond what has been previously experienced.

It’s only using this training method that you’ll force your muscles to grow and adapt.

Isolate Muscles in the 8-10 Rep Range

The key to getting a Thor-like body is to make sure smaller muscle groups get plenty of size added.

However, these smaller muscles can’t be worked so aggressively with sets in the 4-6 rep range. That’s why they need a higher volume range to still create stress without damaging joints.

So a simple application would be 3 sets of 8-10 reps to create just as much fatigue for growth.

Eat in a Minor Caloric Surplus

Chris Hemsworth’s body fat percentage could be estimated at around 10-12% since he’s lean enough to have visual abdominals, but not so lean that his arms are really vascular like Hugh Jackman as Wolverine.

A good strategy would be to lose enough body fat with a caloric deficit to get down to about 8% and then gain some more muscle size up to about 10% to maintain a consistent pump.

You can estimate your daily calories for a surplus by taking your body weight in lbs and multiplying by 17-19.

For example, if you weigh 180 lbs you could calculate your daily calories like this:

Getting a Thor-like body takes a lot of hard work, but if you’re willing to put in the time and effort, you can start seeing God of Thunder results.

But what if I told you that you could get a superhero body without:

Sound too good to be true? I thought the same thing until I discovered this workout routine and now building muscle and bulking up is a lot easier than it used to be.