For years, movies and television have perpetuated the myth that when guys go to prison they come out on the other side crazy ripped because they have nothing else to do but workout in their cells while doing time. But, that’s not really a thing, is it?

Of course, it doesn’t happen to everyone, but it does happen. In 1979, a man named Paul Wade went into a California prison and more than two decades later he walked out a much stronger man both mentally and physically thanks to the secrets of exercise he learned from his 71-year-old cellie. And, in 2009, Wade released his first book called Convict Conditioning based on the things he had learned.

The idea behind this workout was that every move could be done in a prison cell without weights, and you were training as if your life depended on it. For the prisoner, the workout was done to survive the prison yard, and the different exercises and progressions were supposed to give you real strength, power, and toughness to survive any situation.

There has been some debate about how true Wade’s backstory is, but there is no doubt that his Convict Conditioning workout is the real deal. This isn’t about becoming a better athlete or being an elite soldier who still relies on weapons and armor.

The Convict Conditioning workout is about being able to survive a maximum security prison like San Quentin or Marion. It develops that survival strength that lies within each of us to keep away the predators. Wade says that these simple exercises and progressions can take anyone who is willing from a weak individual to an ideal specimen of strength. But, is this for real? Does Convict Conditioning really work?

Keep reading this Convict Conditioning review to find out more about the original workout book, the app, the 2nd and 3rd generations of the program, and everything else associated with Conviction Conditioning by Paul Wade.

Affiliate Disclaimer: Right up front, we want to be completely honest with you and let you know that Noob Gains is a Dragon Door (Convict Conditioning) affiliate. That means if you click any of the links on this page and order the book, Noob Gains will earn a small commission. However, you’re under no obligation to purchase anything. Please use your best judgement and make a decision for yourself whether this product will actually work for you and your situation.

First, let’s talk about the details of Convict Conditioning. Simply put, it’s a program of bodyweight exercises – AKA calisthenics. As I said earlier, this is all about working out in a prison cell, so no weights are needed. Instead, you are using your own bodyweight for your resistance training to increase size and strength.

But, how do you increase your resistance and progress when you are only using your bodyweight instead of a machine or free weights?

You might think that you should just increase the number of times you perform an exercise in a given amount of time. For example, for your first workout, you do as many push-ups as you can in one minute. And, then during the next workout you try to increase that number.

Here are the “Big 6” moves that are the core of the Convict Conditioning workout:

The majority of those moves might seem rather easy, but hitting “mastery level” isn’t. Wade talks at length in the book about how perfect form and cadence are the keys to this workout for both increasing size and strength and avoiding injury.

Wade gives detailed instructions about each movement, and then he breaks each of them down into ten steps – from beginner to mastery. Each step has rep and set requirements that you must master before you can move on.

For example, for push-ups you start at the beginner level with wall push-ups, and you must be able to perform three sets of 50 reps with perfect form and cadence (as Wade describes) before you move onto working incline push-ups. The most difficult push-ups in the progression – level ten – are one-hand push-ups, and you have to be able to do one set of 100 PER ARM to master that level.

Your best bet is to check out the customer reviews and see how difficult it was for them to get past some of these hurdles.

Pros of the Program

I think what surprises most athletes who try it is the effect bodyweight strength work has on the joints. There’s no getting around this: Done right, bodyweight training strengthens your joints instead of wearing them down. Why? Because the body was meant to move itself. We literally evolved to push and pull ourselves around, and to squat and jump using bodyweight.

When you progress in your Big 6, you will be building your strength and improving your mobility at the exact same time. There is a lot of attention to detail in this book, and it works for someone who has never worked out a day in their life and also for an accomplished athlete. Honestly, everyone can benefit.

Cons of the Program

While the Reddit reviews are generally on the positive side for Convict Conditioning, the program definitely has its fair share of criticism. While the idea of bodyweight exercises and progressions definitely has merit and you will see results, the criticism of Convict Conditioning on Reddit is like mine – the progressions aren’t necessarily the best ones to follow and the rep requirements are extremely high.

This might not work for some people, and that’s ok if it doesn’t. Just be aware of what you are getting yourself into, and understand that is going to take a ton of work. This isn’t a trendy workout program that lasts 90 days. You are making a serious commitment here and some of the progressions might not work for you.

The Convict Conditioning app is available for free, so honestly you don’t need to buy the book to start the program. This app is like having a personal strength trainer at your fingertips, and it will teach you how to do every workout in the program. It also tells you the order and how many sets and reps you do, and it tracks your progress.

If you want to know more details and the why behind each movement and progression – plus get advice and insight – then definitely buy the book. But, if you just want to know the movements and reps, then download the free app and get started.

The features of the Convict Conditioning App are:

There is no Convict Conditioning Wikipedia entry, and this is one of the many reasons that people doubt the backstory of this program. Until recently, Paul Wade didn’t do interviews and he still doesn’t allow pics.

Some believe that Paul Wade could be a pseudonym, others believe he is not a real person at all. However, he supposedly gave an interview to Bodybuilding.com this past summer, and this is what he had to say.

The most important difference between Convict Conditioning and PCC (Progressive Calisthenics Certification) is that Convict Conditioning is just about building raw muscle and strength using bodyweight only. This was the kind of goal inmates all had, and the workouts in the book were built around this goal.

In the sequel, Wade takes you even deeper into the subtle nuances of training with the ultimate resistance tool: your body. With his understanding of anatomy, physiology, and kinesiology, Wade explains very simply how to work the smaller but just as important areas of the body such as the hands and forearms, neck and calves and obliques in serious functional ways.

Convict Conditioning 3: Explosive Calisthenics came out in 2014, and in that book Wade introduces the “Explosive Six” which will turn that strength you built in the original program into incredible power. The “explosive six” movements are: the suicide jump, the superman, the no-hands kip up, the front flip, the back flip, and the muscle-up.

So there you have it. The Convict Conditioning Workout is definitely a challenging program that can build muscular strength, but it has its drawbacks. It takes a lot of time and commitment, and some people say the progressions don’t work for them. But, one thing is for sure, bodyweight training has a ton of benefits.

Another con of this program is that it would have made a good course. That’s why I’m a fan of the Kinobody Bodyweight Mastery Program because of the videos, forum access, and bonuses included with the program.

What’s still great about Convict Conditioning is there’s plenty of support available via forums like Reddit and Dragon Door that can help you through any mental or physical obstacles that might slow down your progress.

If you’re interested in getting leaner and building your muscular strength using only your bodyweight, click the button below to see the current price of this program. 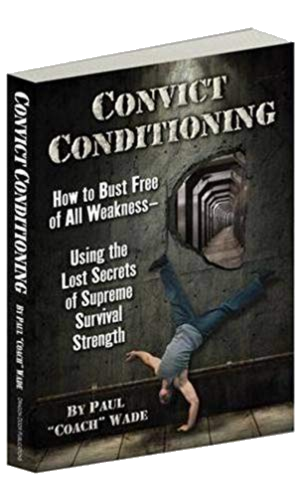 Natalie is a freelance writer with a Bachelor's Degree in Journalism from the University of Kansas. She has tried every fad diet and workout program known to man (she claims to still have her set of Tae Bo VHS tapes), but has now realized that the secret to fitness is staying active and eating a healthy, macro-balanced diet. After she began writing for NoobGains, Natalie decided it was time to put in some real work towards her ultimate fitness goals, and she started the Kinobody Goddess Toning Program so she can achieve that slim and sexy look she's always dreamed of.